” One of the “Three Kings of the Blues Guitar” (along with B.B. King and Freddie King), Albert King stood 6 ft 4 in (1.93 m) (some reports say 6 ft 7 in (2.01 m)) and weighed 250 pounds (110 kg) and was known as “The Velvet Bulldozer”. He was born Albert Nelson on a cotton plantation in Indianola, Mississippi. During his childhood he would sing at a family gospel group at a church where his father played the guitar. One of 13 children, King grew up picking cotton on plantations near Forrest City, Arkansas, where the family moved when he was eight.”

” He began his professional work as a musician with a group called In The Groove Boys in Osceola, Arkansas. Moving north to Gary, Indiana and later St. Louis, Missouri, he briefly played drums for Jimmy Reed‘s band and on several early Reed recordings. Influenced by blues musicians Blind Lemon Jefferson and Lonnie Johnson, the electric guitar became his signature instrument, his preference being the Gibson Flying V which he named “Lucy”. King earned his nickname “The Velvet Bulldozer” during this period as he drove one of them and also worked as a mechanic to make a living.”

” King moved to Gary, Indiana in the early 1950s, then to Chicago in 1953 where he cut his first single for Parrot Records, but it was only a minor regional success. He then went back to St. Louis in 1956 and formed a new band. During this period, he settled on using the Flying V as his primary guitar. He resumed recording in 1959 with his first minor hit, “I’m a Lonely Man,” written by Little Milton, who was Bobbin Records A&R man, a fellow guitar hero, and responsible for King’s signing with the label.” 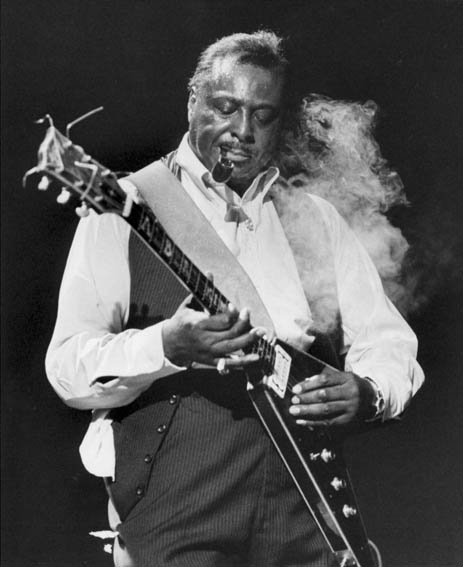 ” Albert King is truly a “King of the Blues,” although he doesn’t hold that title (B.B. does). Along with B.B. and Freddie King, Albert King is one of the major influences on blues and rock guitar players. Without him, modern guitar music would not sound as it does — his style has influenced both black and white blues players from Otis Rush and Robert Cray to Eric Clapton and Stevie Ray Vaughan. It’s important to note that while almost all modern blues guitarists seldom play for long without falling into a B.B. King guitar cliché, Albert King never does — he’s had his own style and unique tone from the beginning.”

” Albert King plays guitar left-handed, without re-stringing the guitar from the right-handed setup; this “upside-down” playing accounts for his difference in tone, since he pulls down on the same strings that most players push up on when bending the blues notes. King‘s massive tone and totally unique way of squeezing bends out of a guitar string has had a major impact.

Many young white guitarists — especially rock & rollers — have been influenced by King‘s playing, and many players who emulate his style may never have heard of Albert King, let alone heard his music. His style is immediately distinguishable from all other blues guitarists, and he’s one of the most important blues guitarists to ever pick up the electric guitar.”

” Albert King left Bobbin in late 1962 and recorded one session for King Records in the spring of 1963, which were much more pop-oriented than his previous work; the singles issued from the session failed to sell. Within a year, he cut four songs for the local St. Louis independent label Coun-Tree, which was run by a jazz singer named Leo Gooden.

Though these singles didn’t appear in many cities — St. Louis, Chicago, and Kansas City were the only three to register sales — they foreshadowed his coming work with Stax Records. Furthermore, they were very popular within St. Louis, so much so that Gooden resented King‘s success and pushed him off the label.”

” Following his stint at Coun-Tree, Albert King signed with Stax Records in 1966. Albert‘s records for Stax would bring him stardom, both within blues and rock circles. All of his ’60s Stax sides were recorded with the label’s house band, Booker T. & the MG’s, which gave his blues a sleek, soulful sound. That soul underpinning gave King crossover appeal, as evidenced by his R&B chart hits — “Laundromat Blues” (1966) and “Cross Cut Saw” (1967) both went Top 40, while “Born Under a Bad Sign” (1967) charted in the Top 50.

Furthermore, King‘s style was appropriated by several rock & roll players, most notably Jimi Hendrix and Eric Clapton, who copied Albert‘s “Personal Manager” guitar solo on the Cream song, “Strange Brew.” Albert King‘s first album for Stax, 1967’s Born Under a Bad Sign, was a collection of his singles for the label and became one of the most popular and influential blues albums of the late ’60s.

Beginning in 1968, Albert King was playing not only to blues audiences, but also to crowds of young rock & rollers. He frequently played at the Fillmore West in San Francisco and he even recorded an album, Live Wire/Blues Power, at the hall in the summer of 1968.”

” Early in 1969, King recorded Years Gone By, his first true studio album. Later that year, he recorded a tribute album to Elvis Presley (Blues for Elvis: Albert King Does the King’s Things) and a jam session with Steve Cropper and Pops Staples (Jammed Together), in addition to performing a concert with the St. Louis Symphony Orchestra.

For the next few years, Albert toured America and Europe, returning to the studio in 1971, to record the Lovejoy album. In 1972, he recorded I’ll Play the Blues for You, which featured accompaniment from the Bar-Kays, the Memphis Horns, and the Movement. The album was rooted in the blues, but featured distinctively modern soul and funk overtones.”

” In 1969, King performed live with the St. Louis Symphony Orchestra, forming what was called an “87-piece blues band.” During the early Seventies, he recorded the album Lovejoy with a group of white rock singers and an Elvis Presley tribute album, Albert King Does the King’s Things. King continued to tour throughout the Seventies, and in June 1970, he joined the Doors onstage at a show in Vancouver, Canada.”

” King’s sound underwent a major change in the Seventies, as he teamed up with the Bar-Kays and the Memphis Horns on the albums I’ll Play the Blues for You and I Wanna Get Funky. That partnership gave his music a much funkier sound than it had on his earlier recordings, and the former album’s title track became one of his signature songs. King also worked with Allen Toussaint and some of the Meters during this period.”

”  If the annals are ever logged as to who the most influential guitar greats of all time were, then there would be no question regarding the inclusion of the three “Kings” of the Blues: B.B., Freddie and Albert. There is little doubt of the impact that each of these artists brought to the future sounds of Blues, Soul and Rock ‘n’ Roll.

Albert King was a master of the single-string attack and was intrigued by Blues performers that he heard while growing up outside of Memphis. In turn, he influenced a new generation of guitar players that would include the likes of Jimi Hendrix, Eric Clapton and Stevie Ray Vaughan.”

”  On February 1, 1968, Albert King shared a bill that included John Mayall and Jimi Hendrix for opening night at a new venue in San Francisco called The Fillmore Auditorium. This popular music hall would become a second home for King, and later that same year he returned to record a live album “Live Wire / Blues Power” became one of the best-selling Live Blue! recordings ever and helped establish King’s career further.

” King continued to record with Stax, until the demise of the label in the mid-1970s. The output of this period included some strange mixtures for a Blues musician. In 1969, Albert became the first Blues performer to perform with a symphony orchestra in a concert that teamed him with the St. Louis Symphony. He recorded the album “Lovejoy “at Muscle Shoals with white Southern rockers and even released a tribute album to Elvis Presley, “Blues For Elvis: Albert King Does The King’s Things“. There was even an appearance on a comedy LP by Albert Brooks, “A Star Is Bought“.

After Stax folded, King would record for a number of labels that would include Tomato, Utopia and Fantasy, until he decided to retire in the mid-1980s. Though Albert King had given up on recording, he still managed to find time to perform. He made cameo appearances on albums by up-coming Bluesmen like Chris Cain (“Cuttin’ Loose“) and Gary Moore (“Still Got The Blues“). He also made frequent stops at Blues festivals around the world, continuing to influence new generations of guitarists including Stevie Ray Vaughan and Robert Cray.”

” King played his final concert in Los Angeles on December 19, 1992. He died two days later at home in Memphis after suffering a sudden heart attack. After his funeral, a procession was led down Beale Street in a true New Orleans-style Jazz tradition, as the hearse bearing King’s body was led by the Memphis Horns playing “When The Saints Go Marching In“. King was laid to rest across the Mississippi River in the Paradise Gardens Cemetery in Edmondson, Arkansas, not far from where he spent his childhood.”

“Albert King has been honored by The Blues Foundation with his induction into their Hall of Fame. Both “Born Under A Bad Sign” and “Live Wire / Blues Power” are also honored as Classics of Blues Recordings. But, the real honor for King is the love and everlasting respect that so many of his peers have given him. Stevie Ray Vaughan would call him “Daddy” and John Lee Hooker named him as one of his all-time favorite guitarists.

Michael Bloomfield once said, “Albert can take four notes and write a volume. He can say more with fewer notes than anyone I’ve ever known.”  B.B. King stated in his autobiography “He wasn’t my brother in blood, but he sure was my brother in Blues.”  Albert King’s legend will live on.  Every time a Blues or Rock combo is on stage, in an arena or small nightclub, or just playing in their garage and grinds into “Born Under A Bad Sign” or “Crosscut Saw“, his influence will be shining true.” 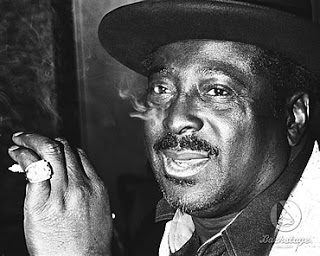 ” King died on December 21, 1992 from a heart attack in his Memphis, Tennessee home. His final concert had been in Los Angeles two days earlier. He was given a funeral procession with the Memphis Horns playing “When The Saints Go Marching In” and buried in Edmondson, Arkansas near his childhood home. B.B. King eulogized him by stating “Albert wasn’t my brother in blood, but he was my brother in blues.”

On December 11th, 2012, it was announced that King would be posthumously inducted into the 2013 Rock and Roll Hall of Fame. “